I’ve been so good about updating this blog every week! Hope I can keep it up!

I had an unexpected sonogram this week! I was having really bad pain around my belly button, mostly after I eat a meal, with my belly getting a little bigger, it takes less to fill me up, but for some reason on Monday the pain was so bad after I ate lunch. I went for a walk to try and get moving a little and it got worse, so I ended up going back to my office and calling the doctor. They wanted to see me, so I went in for a quick visit. She thinks I have a hernia behind my belly button, but its nothing a general surgeon will do anything about during pregnancy and something I’ll have to follow up on postpartum. She suggested a girdle or something to hold it in if it really bothers me. I think I’ll just have to stick to more small meals and try not to eat too much in one sitting, that’s when it seems to get worse. She explained how the GI system slows down during pregnancy and that could be irritating it.

Anyway, she tried to use the little sound machine to get a heart beat on the baby and once again she couldn’t hear it, so sent me in for a sonogram. They all think its weird that they aren’t able to pick up the sound of the heartbeat at 11 and 13 weeks, but the sono tech wasn’t surprised at all. Made me scared for a couple minutes but once I saw the baby on the TV screen again, all was good! Phew!

Stretch marks? No, but I am starting to use my cocoa butter routinely now, just in case.

Sleep: I’m so tired by bedtime that I’ve been heading up to bed by 9:30 most nights, but I think I’m going to bed too early because I’m waking up so early and then of course can’t fall back to sleep. The one night I try to push it back to 11, I managed to stay awake but then Ada decided she wanted to be crazy from 1am-3:30, which ended up keeping me up and even more tired the next day! Having kids is rough!

Best moment this week: Getting an unexpected sonogram. I got to see baby again and everything looked great still! I even asked the gender again and she confirmed what she thought it was last time. She said it was still pretty early and could change but she was getting more and more sure of what it was!

Have you told family and friends: Yes, we are telling people, mostly when it comes up naturally or when someone spills the beans for us!

Miss Anything? Wine, I would really like a glass of wine.

Movement:  I sometimes think I can feel it again when I’m sitting really still. The sonogram this week it was moving like crazy, arching its back and kicking feet. So I’m not surprised if I am starting to feel it, for real this time.

Food cravings:  Tomatoes! I’ve always loved tomatoes, but lately I’ve been eating them plain with just a little salt. I’ve also been having my Tim Horton’s Iced Capps again, which I’ve been avoiding the whole first trimester because of the caffeine. Now that I’m in a safer place, I’ve been having one or two a week again, because they are just so delicious!

Anything making you queasy or sick: Nope been feeling better lately. The cold is gone and the headaches seem to be gone as well, which is good because I was getting nervous having to take so much Tylenol. I know its safe but still makes me nervous. I also went back to the prenatal vitamins I was taking before. They were making me gag earlier, and while they still aren’t going down perfectly smooth its much better and I think they are just easier on my stomach then some of the other ones I was taking since these ones are whole foods and organic.

Have you started to show yet: I personally think so. I don’t think anyone on the street would call me out yet but most of time there is a little round bump. I still wear fairly lose fitting tops at work because most of my team doesn’t know yet. I think I’ll just let that ride as long as I can and then one day just come in looking really preggo in a fitted top or something. That could be fun!

Gender prediction: I’m going to avoid answering this question until we decide to announce it. I feel like I am 85% sure of what it is and I can’t truthfully answer this without giving it away. Once we get our 100% sure we’ll do some kind of gender reveal.

Belly Button in or out? Let’s not even go there. It felt like it was the size of a grape this week when I called the doctor. Usually I can deflate it when it gets big like that after a big meal and it hurt so bad I couldn’t even touch it. I’ve been feeling okay since that episode, but I really have to pay attention to the size of my meals I think.

Wedding rings on or off?  On

Happy or Moody most of the time: Pretty happy, except when Ada keeps me up at night, then very moody!

Looking forward to: Ada’s 4th birthday party is in less then 2 weeks. We are doing a Trolls party so I’m excited to host that. Last party in our old house! I’m looking forward to moving and getting that over with. We also have another (regularly scheduled) doctor appt. next week, if they can’t get a heart beat with the sound machine again, hopefully I’ll get another sono, haha another chance to confirm that gender!

Here’s a picture from our unexpected sonogram this week, my baby already has the cutest little face and side profile! What a little doll!

And lastly a bump picture. Not the best one as I took it myself and with the window behind my head I had to cut it off or it looked silly! But it definitely started to make an appearance this week, so I’ll share it anyway! 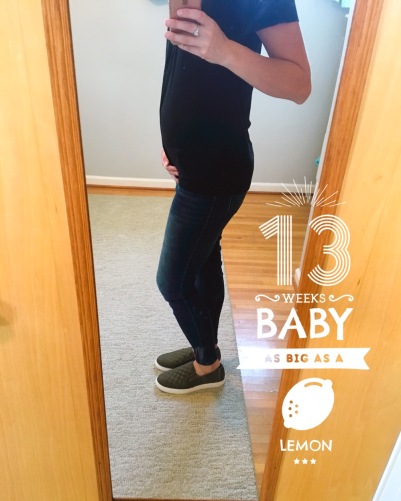