Skip to content
We finally made our rounds and told our Family and some close friends this weekend! We went around to our parents house on Sunday before the Superbowl (on my birthday – and what a memorable one it was!) We told both our parents and siblings the same way, I made these little keepsake cards for everyone. Our Mom’s both said “The only thing better then having you for a mom, is our child having you for a Grandma!!” Our Dad’s cards said “The Best Dad’s get promoted to Grandpa” and our brothers and sisters cards all said “I can’t wait to meet my Aunt/Uncle!!” The insides all looked the same with a picture of our running sneakers and an extra tiny pair! 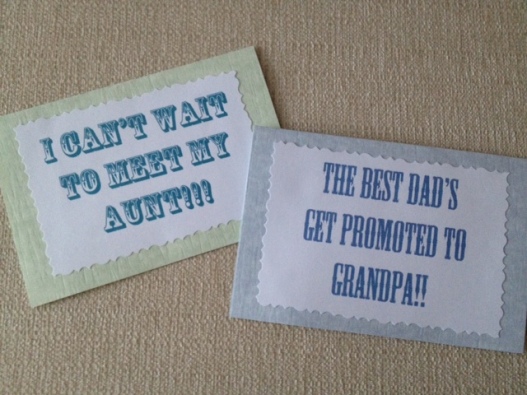 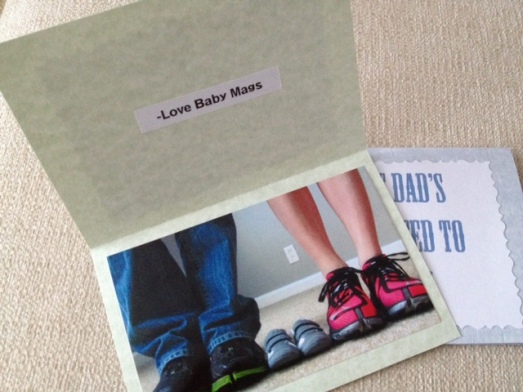 It was so much fun telling everyone, I wish I would have been better about taking photos when we told everyone, we did manage to capture a moment when we told some friends. Both the girls are already pregnant, so I told them I wanted a birthday picture and when Dan held up the camera to get a picture of the three of us, he said “a picture of all the pregnant ladies!” She didn’t get it at first and he had to say it a few times, but her reaction was priceless when she finally got it. Here is the one moment we did manage to catch on camera! The bottom one is blurry because she was running all around! Haha 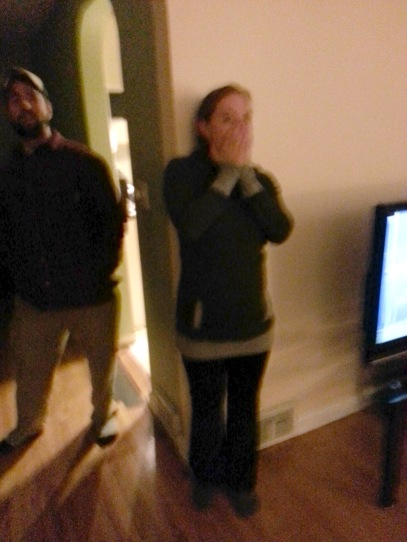 We told some of our other friends with some clever one liners, Dan spilled the beans once by saying that he had a DD all summer long, took them a minute but they caught on quick. Another set of friends, who are 6 weeks ahead of us, we told by asking them if they wanted to take Baby classes together! We’re waiting to tell everyone else until after my first sonogram which will be February 28th. Once we have the “all is good” from the Doctor I’ll feel better about telling everyone else, and boy will that be easier! Going out with friends is so complicated now, coming up with excuses about why your not drinking on your birthday and during the Superbowl is pretty tricky! It will be nice when we don’t have to pretend anymore!