Skip to content
Its hard to believe Ada is almost 6 months old.  I was just reading back on my post from when she was just one month and it was so amazing to read my thoughts during that time. Those first four weeks were definitely some of the most challenging times and its funny now because we feel like she’s been with us forever. 6 months isn’t that long but we really can’t even remember what life was like before Ada was part of it. I wanted to try and go back a little and recall some special moments since that post!
Meet Barrett, this is my girlfriends beautiful baby boy who was born just 5 weeks before Ada. This photo is from one of their first play dates together! They are going to be the best of friends, but Bear’s mommy and Ada’s daddy are cousins, so we will need to remind these two as they grow up that they are related to one another!!

Ada’s first Halloween she was my little lady bug! She did such a great job playing the part too, just look at those little bug dimples! 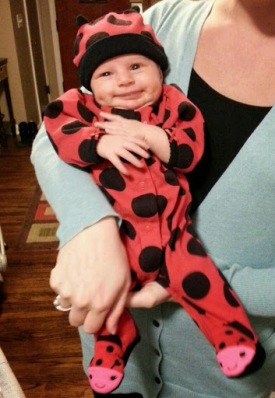 She continues to absolutely love bath time, and I still swear by the fact that she sleeps better when she has a bath. She’s been such a great sleeper, from 8 weeks right through Christmas we were getting a solid 10 hours a night, every single night. We back tracked a little over the holidays but I think we had her schedule all out of whack with all the holiday parties and house guests! 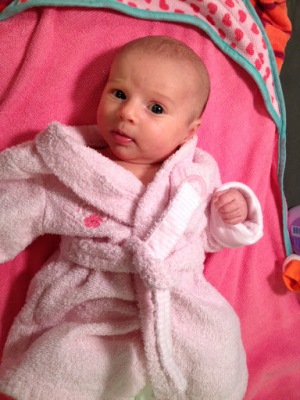 Little peanut is such a chill baby, she loves just hanging out on the couch with mom and dad after work, now that she’s a little older she likes to lay by herself on the couch and not so much with one of us, she’s snuggly but I think she likes her freedom too. After being held for too long baby girl just likes to stretch out and play on the floor or couch! 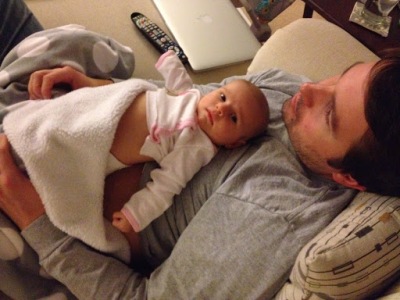 This girl LOVES football! Whenever we needed a distraction we put her in front of a football game! Lucky for us she was born during football season! We’re hoping she doesn’t have her Daddy’s temper when it comes to the Bills losing. (She better learn that the Bills never win and she shouldn’t get her hopes up!)

Finally below are some pictures from Ada’s first Christmas! Even though she was still so little at Christmas, it was amazing to see her expressions for everything. She loved all the lights on the Christmas tree, and she was so amazed Christmas morning, we sat her in the Bumbo seat and opened presents with her, my favorite one is her expression when we opened her Elf on the Shelf (below). I also did my best to do a Christmas Photo shoot with her in her outfit. I did this a few weeks before Christmas with the intention of doing a Christmas card, and I captured some of her first great big smiles, the one below was one of my favorites, you can almost hear what a happy baby she is! 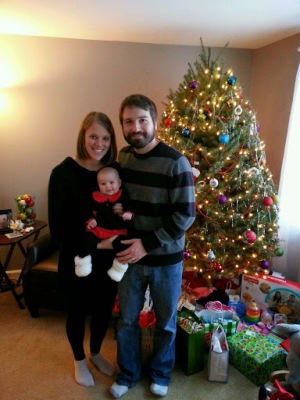 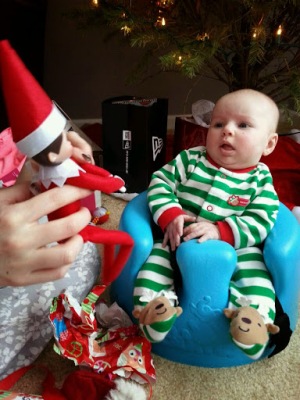 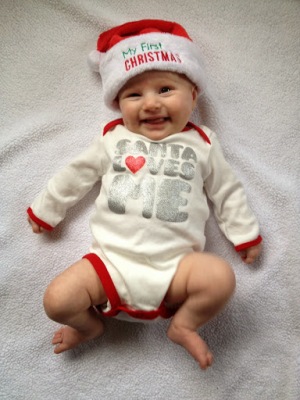