We took our first family vacation last week to Washington D.C and baby girl was amazing! 6 months is really the best age! She was so much fun and was so excited to see everything, yet still little enough to transport easily and would still take nice long naps in the stroller. We traveled with our friends who also have a little girl who just turned one in February. It was a long car ride (about 8 hours) but both girls did great, we had so much fun and I would definitely do it again a million times over!

We visited the The National Zoo on our first day and lucked out with the best weather, not too hot but nice and sunny! Ada slept for most of the morning, but she got out of the stroller long enough to see the Panda Bears, the elephants and some of the monkeys. 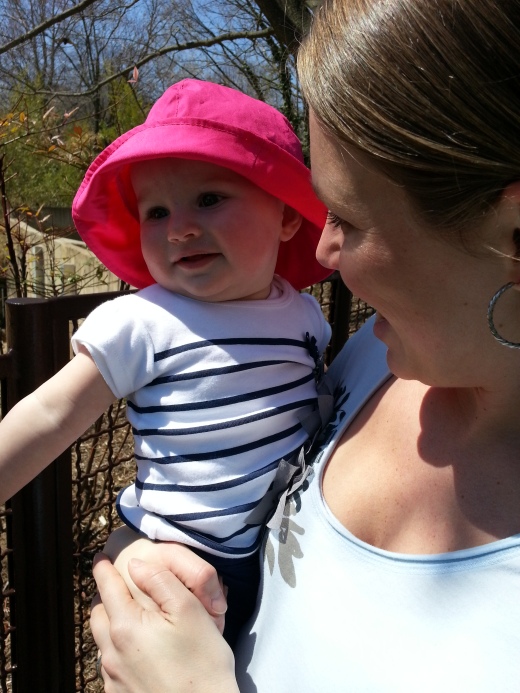 After the zoo we had lunch at an awesome Lebanese Restaurant called Lebanese Taverna! We then took the metro to downtown D.C and strolled passed some pretty famous buildings.

Our second day we ventured back into D.C and attempted to tour the Capitol Building, apparently security is pretty tight around there and they wouldn’t let us go in with 5 water bottles, and 2 huge overstuffed diaper bags, so we just walked around the building, saw all the beautiful Cherry Blossoms then headed over to the Smithsonian Buildings.

We first did the National Air and Space Museum. I had Ada in the baby Bjorn Carrier and she was loving life. Girlfriend was soooo excited to see everything, I’ve never heard her giggle, coo and smile so much in such a short amount of time!! We had lunch at a great Mexican restaurant called Oyamel Cocina Mexicana which was fantastic and I had a phenomenal mojito!! After lunch we did the Natural Museum of History and Ada decided as soon as it was dark and cool that she would take a little nap. So she slept through that whole museum too! Luckily she won’t remember this trip anyway (and hey, everything is free in D.C)!

Our last full day we played it more low key, the babies we’re getting tired of constantly being packed up so we walked the town of Old Alexandria where we stayed. We walked down the shops to the waterfront and just strolled in the sun, we then decided to have some drinks and a light lunch at any place with an outdoor patio, so we strolled back up the street and sat outside enjoying the nice weather at 3 different places (nothing like bar hopping with babies!) It was just the low key afternoon we needed though, the babes were so good and they loved sitting in our laps in the shade. 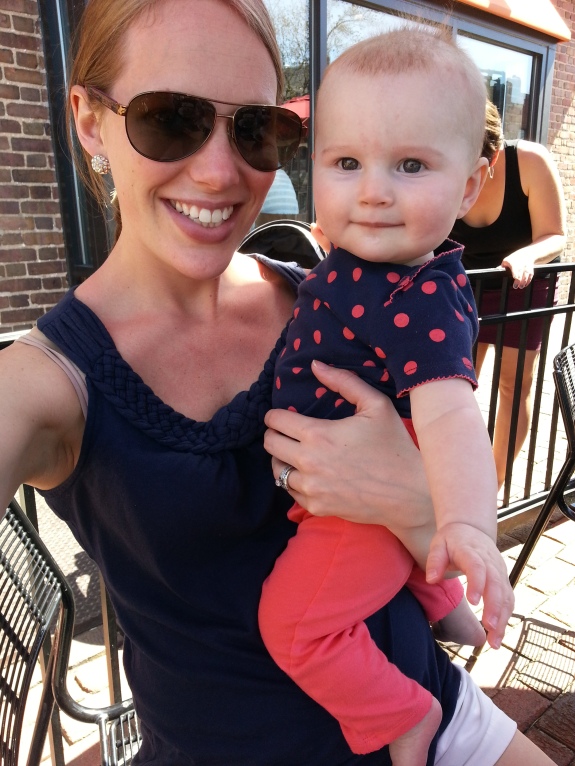 We left fairly early on Sunday and made it home before bedtime. I was lucky enough to have Monday off of work so I had an extra day to get caught up and spend some quiet time with my little lady.

I am just loving every single minute with her lately, she is absolutely amazing to watch right now as she figures everything out. We started eating cereal and some veggies about 2 weeks ago and while its been tricky and a little frustrating at times, she’s starting to get the hang of it and gobbles everything I give her right up. She will reach for everything that is just a tad out of reach and watching her struggle to figure out how to get to it is amazing, she’s starting to try to twist those little legs underneath her and balance on one foot or a knee, which means crawling is right around the corner. She’ll use me as her stabilizer only to pull herself up to a stand, and will pull on everything else that’s nearby to help her get to where she wants to be. On our car ride home I was sitting in the far back seat of the van so the babies we’re facing us, and I just watched her as she moved her fingers and hands around in front of her face trying to figure out what else she might be able to do with them (like get herself into all sorts of trouble!) Going back to work this week was much harder then when I went back after maternity leave. She’s just so interactive and fun now that I want to spend all day just playing and teaching her things!

All in all it was a terrific family vacation and Ada was at a really great age to travel with! Would highly recommend D.C with kiddos and even so with a 6 month old!