It’s been awhile since I’ve posted, but I have some fun news that I’ll share soon so check back for a big announcement! In the meantime I thought I’d share how our big Hawaii trip was!

It was a very looong trip (distance wise) New York is very far from Hawaii and if there is any reason why we wouldn’t go back, that would be it! It was also a looong time to be away from Ada, I decided I won’t do that again either! Aside from that we enjoyed our self very much, and it was great to just be a couple again, not be mom and dad or working all week. I think that was the point of this trip more then anything, we wanted to just have some time to our self, to reconnect, to be adventurous and to sleep! And mission accomplished!

I will say that I didn’t care for Honolulu quite as much as I thought. Waikiki is very touristy and its a big City, and to be honest, that’s exactly what it felt like, any old City USA.  The food was phenomenal though we did not have a bad meal, I’ll do a recap in another post of all our favorite places that we ate on Oahu.

I celebrated my 30th birthday while we were there. We kinda had a  big splurge day that day and did A LOT of expensive things. My hubby spoils me I guess. We started my birthday with a couples massage at our hotel. We stayed at The Hilton Hawaiian Village which was fabulous, and the Mandara Spa actually had really high ratings so we booked that. After our massages we took a snorkel catamaran tour, that again, was right at our hotel, and got to snorkel with the sea turtles. The catamaran was a little shorter then we like, I usually like to spend the whole afternoon out in the open water, but it was still fun and included two free cocktails. 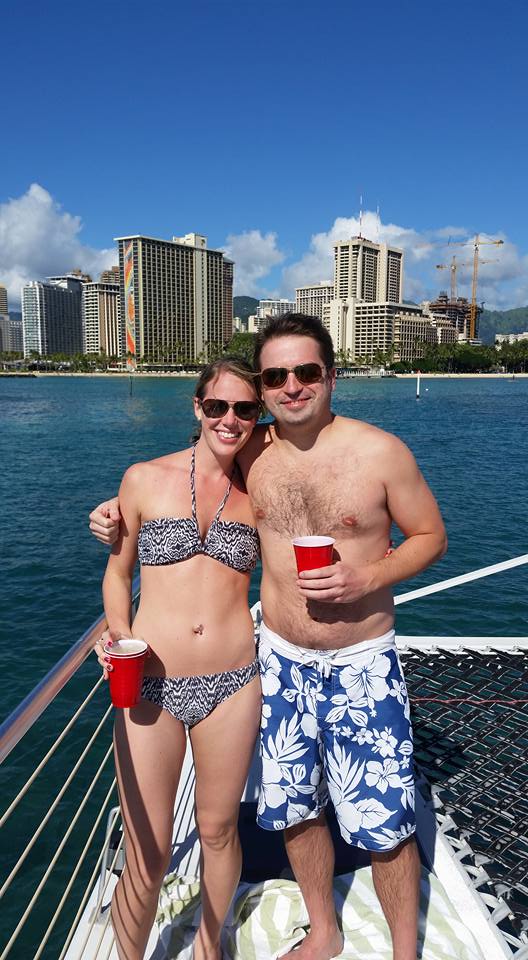 We walked to dinner at Nobu-Waikiki and this is where we over-did it a bit. The restaurant came highly rated from some foodie friends that have dined there. Its also known for hosting a lot of celebs when they are in town. Instead of just ordering dinner, we decide to do the Waikiki chef’s tasting, which was a 7 course, (absolutely amazing) display of the chef’s favs. Would highly recommend this, but it came with a hefty price tag!

We took a day to drive  up to the North Shore, which was a lot of fun. We rented a car for only 2 days of our 8 day trip. Most of what we did was walkable from the hotel, but on the days we had the car we were able to really get out and explore which I’m glad we did. We visited Pupukea Park to check out the Banzai Pipeline, there isn’t much to do but watch the surfers since there is no way we were getting in that water. Then we road tripped back up the coast and hit up Waimea Bay, and the little surf town of Haleiwa. We of course tried the garlic shrimp plate at  Giovanni’s Aloha Shrimp and then tried the shave ice at Motsomoto, gotta get it with the ice cream for the best thing you’ll ever have. It was huge though and we probably could have shared one! 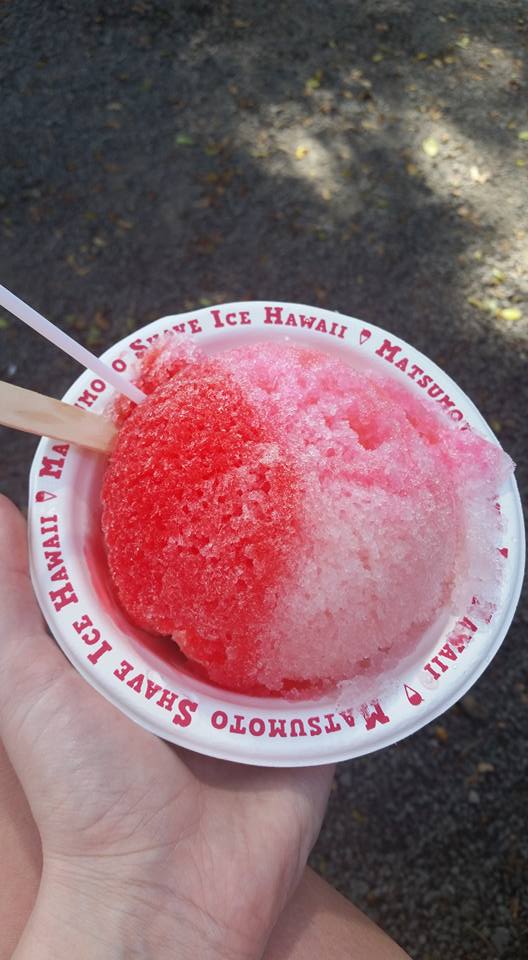 Day two with our rental car we headed to the small town of Lanikai and hiked the Lanikai Pillboxes. Everything we read said the trail was hard to find, and although it was weird that it was situated in the middle of a neighborhood, we didn’t really have any trouble finding it. The hike was a bit rugged, not difficult for anyone in good health, but there were some steep climbs and boulders to scale. It was a short hike and the view of the “moks” was amazing. You could also see Lanikai Beach from the trail, which was our second stop.  After getting our sweat on, we headed to the beach to relax. My husband has a hard time sitting still and relaxing when he knows we have more stops to make, so we didn’t stay long before we headed back out. We grabbed lunch at this small, hole in the wall place that had excellent Yelp reviews.  We both got a lunch plate. It really was amazing, and probably one of the cheaper meals we had while in Hawaii. 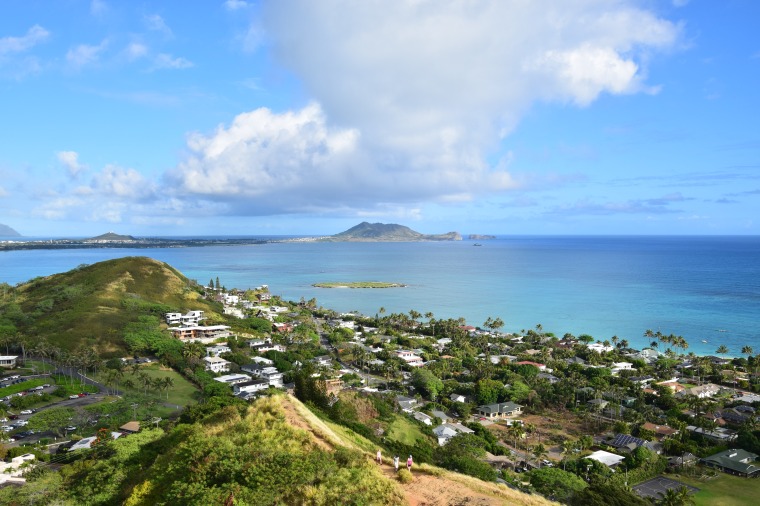 The second part of the day was supposed to be an afternoon at Hanauma Bay, which out of everything I read before this trip was the ONE THING you HAVE TO do! But of course, we got there and it was closed!! We were able to still go into the park because its a state Nature preserve, but the beach access was closed off due to electricity problems on the beach. The day before it was closed because of jellyfish! What are the chances?!

Instead we did something that we weren’t sure we were going to have time to do.  We did the Byodo-In Temple which was beautiful and so peaceful. It was such a change in pace from Waikiki Beach, where its bustling with people. It was quiet, full of koi fish and black swans. We entered the temple where you have to take your shoes off and then rang the gong before we left. The temple sits in the middle of a giant cemetery with a gorgeous volcanic mountain backdrop. It was a photographers dream! 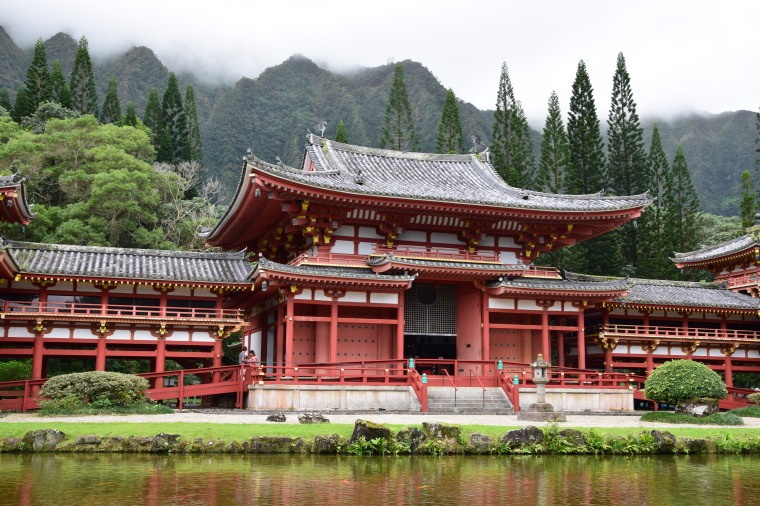 On our last morning we decided that we wanted to hike Diamond Head before we left, but of course we didn’t have the car anymore. We found out that Diamond head was only about 3 miles from our hotel, so we put on our running shoes and ran! We ran the 3 miles to the crater, hiked about 1.5 miles up to the top at sunrise and then ran back. It was about 8 miles total and worth every second. The Diamond Head hike wasn’t exactly what I thought it was though.  It was like herding tourists up a mountain, there were so many people and tour groups, and the trail was a path with hand rails, hardly a rugged trail hike, there were also a TON of stairs at the very top, which burned a little after a 3 mile run! But in general totally worth the view at sunrise! 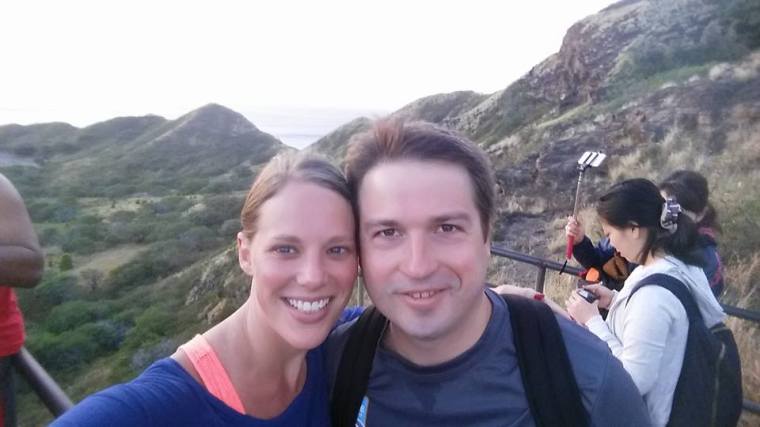 The rest of the trip we did a lot of beach time, we took a surf lesson. We sat at the pool and I feel like the trip revolved around where to eat next!   I wish we did more then one island, although we didn’t really have a lot of time to island hop. I think next time I would do a bit more authentic Hawaii in Kauai, Maui or the Big Island. Honolulu was such a big city it felt like we could have been anywhere. We also like the all-inclusive resorts a bit more because we can plan a little better how much we’re going to spend. We also tend to be big drinkers and the all-inclusive is the way to go for that! We can get beaches, palm trees and warm sunny weather without taking a 17 hour plane ride. 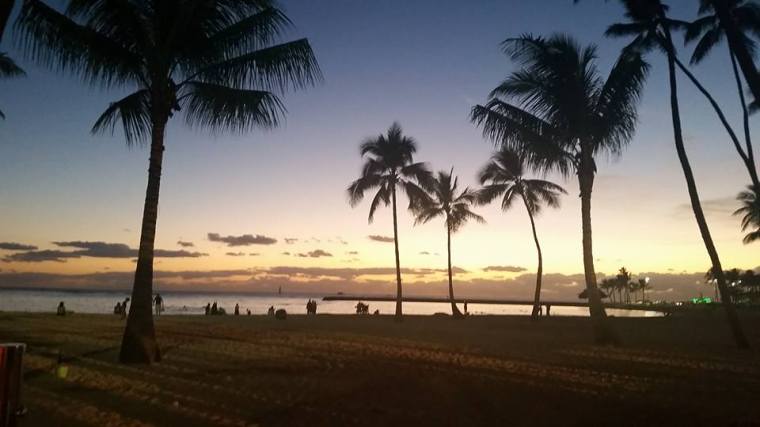 We loved Hawaii, don’t get me wrong. We had a great time and I definitely want to go back again, but we’d do things a bit differently!

One thought on “Oahu, Hawaii”