I know I haven’t posted ANYTHING since I announced Holly’s Birth, and she’s going to be TWO in a couple weeks, times flies. (We actually have AdventureWithTheMags.com where we share stories of our travel adventures now instead). This blog was originally created so I could track my pregnancies and I’m so glad I did such a great job documenting the last two, because now I’m back and announcing Baby #3!!! Yep, September 2020 another little one joining our crew (and hopefully the last one). I was torn on whether or not I wanted to blog this one, but then I read through some old posts from the other two and I was so glad I had so much documented. So I decided not to shaft the third kid and come back for more.

I’m currently 11 weeks but I’ll try to recap from 6 weeks on briefly without rambling too much.

So, week 6-11…. We didn’t find out until I was almost 6 weeks, we had been away on a little weekend ski trip in Ellicottville and when we got home I was late so I decided to take a test. I only took one test this time. I know my body and when I saw the big “pregnant” on the digital test, it was all the confirmation I needed this time.  Surprised yes, but not in complete shock like the other two haha.

I had Holly help me with a little photo that I texted to Dan a little while later while sitting across from him on the couch. He was a bit more shocked. We hadn’t really been trying and the plan was kinda to wait for spring, but everything happens for a reason and we are so excited! Below is the photo I shared with Dan.

I called my doctor the next morning and she sent me for blood work, everything came back positive and numbers looked good. 48 hours we repeated the blood work and everything more then doubled. Because of my history of miscarriage they did have me in for an early  ultrasound the following week at week 7, we were measuring a little behind where we should have been, so 10 days later we got a second ultrasound just to check on the growth and they were happy with everything. I was supposed to come in at 10 weeks for my first “official” appointment, but we were traveling and so it was postponed until today,  I’m actually 11 weeks 5 days and of course we had a major snow storm blow in last night, so everything is closed today. So we’ll probably be over 12 weeks by the time I get in to see them now. 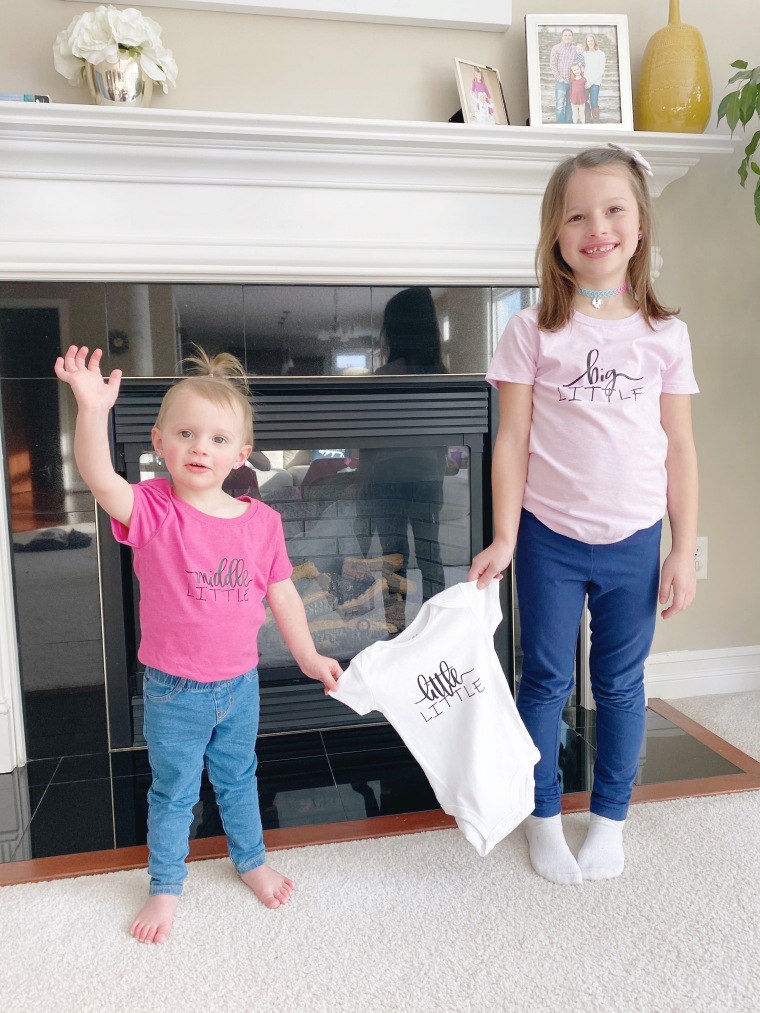 I told Ada that I wanted to sell these shirts I made on Etsy and she asked no questions. Haha so they took the picture and we texted it to our family. Love sharing this news via text now, haha Its the fastest way to spread news and half our people live out of town anyway!

So how have I been feeling? I’m gonna skip the formal survey that I used to do for now, I may go back to it, but today I’ll just bullet some stuff.

-Thrown up twice already, which is more then I did with both girls (once with each of them).

-I’ve had strept throat twice, a sinus drip/persistent cough, 24 hour stomach bug and a nasty cold. Fortunately nothing serious, like flu, but just enough to keep me feeling like crap most of the time.

-I was working out a lot before I got pregnant, so I felt like I was in the best shape I was ever in before getting pregnant and I intended to keep working out, however being sick all the time hasn’t kept me on track. I think I did good for the first 2 weeks we knew and its been downhill from there.

-Showing? Not really, some days a little and some days not at all. That’s actually the reason I was reading through old blog posts last night, I wanted to see when I started to show last time. With Ada it wasn’t until about 15-16 weeks and with Holly I was noting it as early as 10 weeks, and I even said I was wearing maternity jeans and using a rubber band on my regular jeans already and I’m no where near that yet, so I feel good about that! The scale shows me up anywhere from 0-3 lbs. so hardly anything yet.

-Food? I have a hard time eating, (probably why I haven’t gained much) I can’t really find anything I want most of the time. I’ve had a lot of digestion issues, mostly after eating anything my stomach hurts and I feel so full for the rest of the day that I won’t eat again. I’ve had more carbs than usual but no sweet tooth or anything like I had with Holly. I had a pretty bad coffee aversion, which was unfortunate when I needed it most. I simply had no desire to get any of my usual coffee drinks.

-Miss the most?  Wine. Always and forever will be my answer. We went on a Disney cruise and I really wanted some beverages. Holly had a small injury our first day which lead to a lot more tears then usual and I REALLY needed a glass of wine after that travel day. We’ve also, the last couple years, really developed a taste for good wine and we love trying new stuff and actually enjoy real wine tasting, and so I really miss that, Its gonna be a long summer.

-And Last, I have to do a gender prediction: I think boy! We are all sure we are getting a third girl, because we are most definitely a girl family, but I feel a little different about this pregnancy. A little sicker, and my food aversions and likes are a lot different. I definitely craved sweets with the girls, from Ice cream sandwiches, to candy, to girl scout cookies etc. and this one I’ve been pretty far away from all that.  My Chinese calendar says boy and it was right with both the girls (well Ada we’re not 100% because we don’t know if she was conceived in December or January, lol) 😂 Hopefully we’ll be able to find out in a couple weeks. I think we do some genetic tests around 13 weeks and they were able to tell us Holly was a girl that early. They confirmed at the anatomy screening at 18 weeks, but either way we are only 1-6 weeks away from finding out.

I’ll finish with a sono pic that we had done already and the only two bump pictures I’ve been bothered to take so far. Hopefully now that I’m back to blogging I’ll get a little better at taking them. 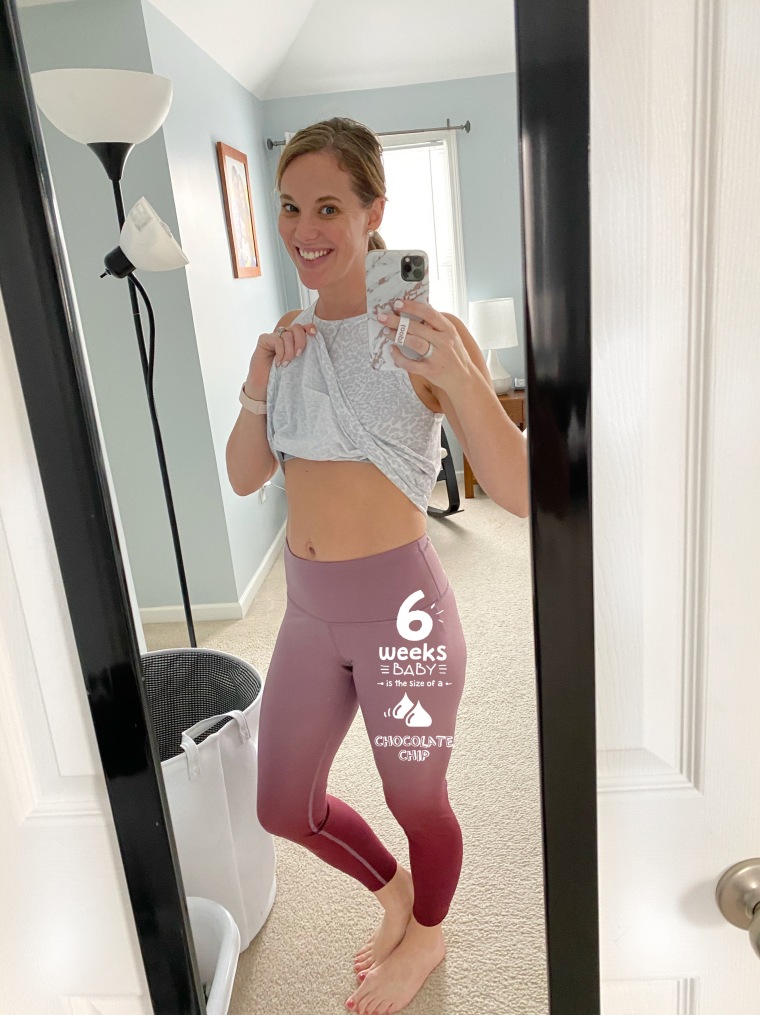