We jammed a lot into the holiday weekend! Having an extra day off was really great and put me in a summer mindset that was really hard to leave, aka I did NOT want to go back to work on Wednesday! Fortunately the rainy weather since then has made it not so bad! But here’s how we spent our 4th of July weekend!

We had our friends over Friday night and it turned into a really late night, keeping the kids out waaay past bedtime, but us grownups were having too much fun to say goodnight, our excuse “Its summer”! While we chatted on the deck we planned a super fun Saturday for everyone! We went to lunch at 12 Gates Brewery, which (despite it being a brewery) was a perfect place for kids, they had picnic tables outsides and lots of room to run around, and even some yard games! We  got there right at noon when they opened so we were the only ones there for about the first hour. The absolute BEST part about this place is that its located right near the airport and the planes fly right overhead, which was awesome! It was a little scary for the kids at first, but they got used to it. We downloaded a flight tracker app so that we could see when planes were coming and give everyone a heads up. 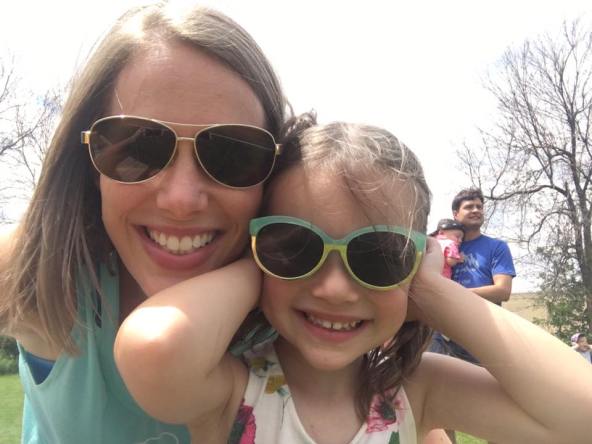 After lunch we headed back to our friends house to go swimming for the afternoon! Ada did awesome swimming in the big pool all by herself with just her water wings! 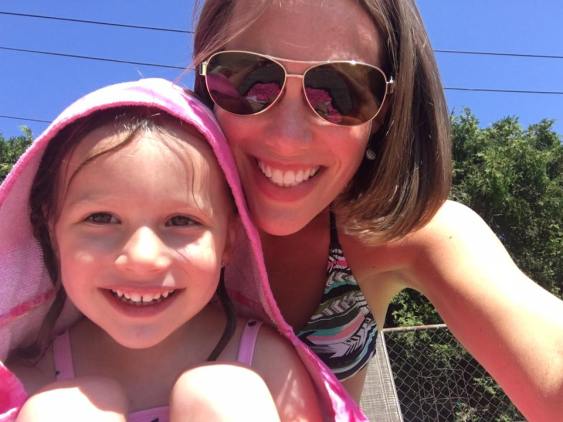 On Sunday, we decided last minute to go up to Conesus Lake, where Dan’s family has a cottage, we go every year. I’m not a big fan of sleeping in a tent which is what has to happen when we go because there are so many people, but we decided to go up around dinner time, after Dan got out of work, and just stay for the fireworks then drive home.

Ada got to go on a boat ride, which she has been asking to do since our Florida trip. she played with cousins and watched the fireworks. Again, it was a VERY late bedtime! 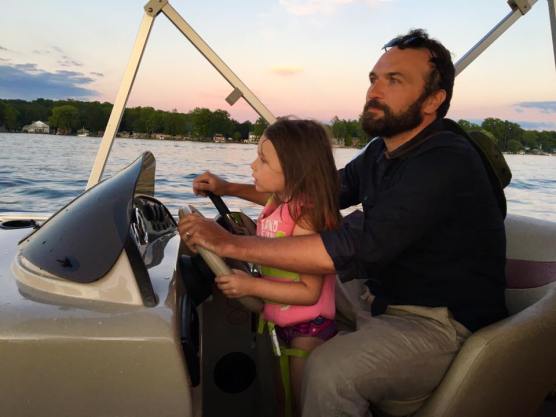 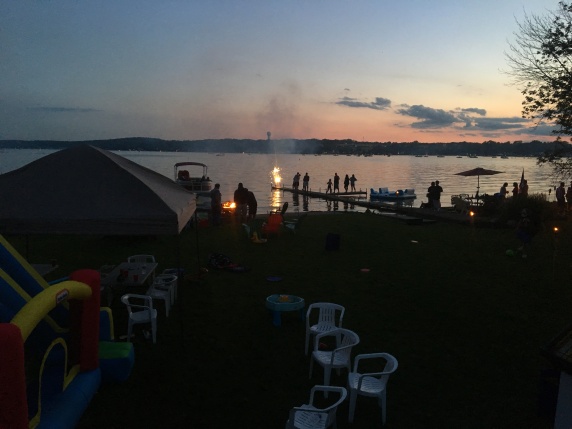 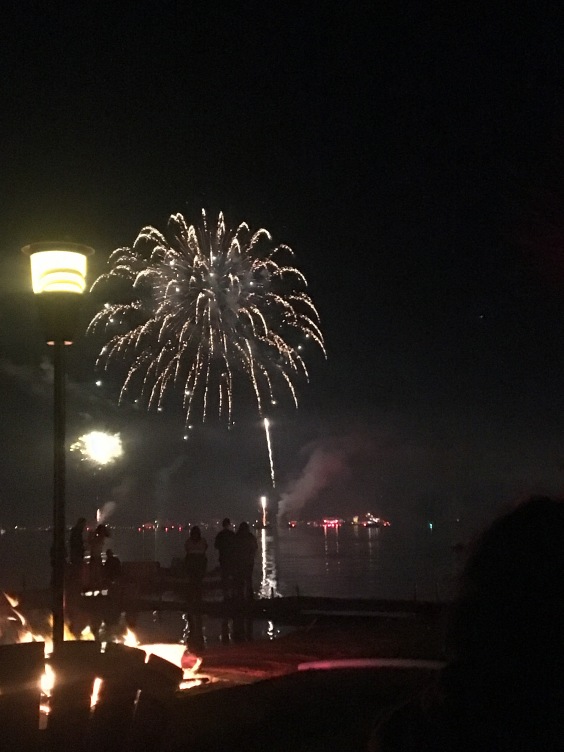 Oh yeah, and our house officially went up for sale on Monday July 3rd!

On the fourth our friends invited us to their house so the kids got to play all afternoon and then we walked to where the fireworks were and let them run around some more! 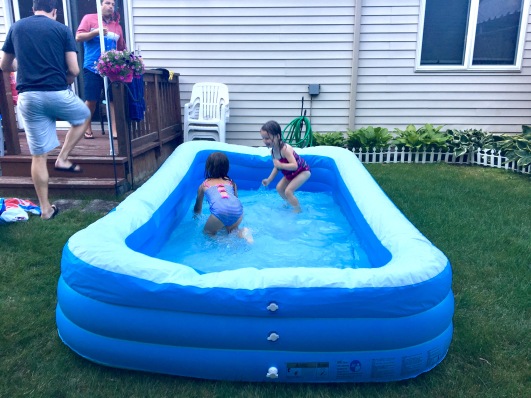 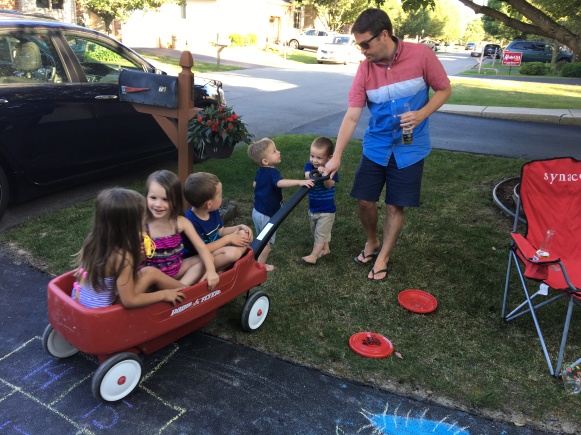 It was a super fun weekend that we didn’t want to end! 4th of July is always my favorite holiday (better then Christmas) Its just feels like summer to me, we stay so busy but its always fun, relaxing things like swimming and campfires!

How did you spend Fourth of July?

I haven’t posted in awhile, we’ve had a lot going on. Between summer fun and getting our house listed to sell!! (Yep, on the move again 3rd time in 5 years, but I swear this is the last time!) Also, I had an appendectomy that shut me down for almost 3 weeks! Lots of craziness over here!

I thought I’d share a quick post of some of my favorite summer time moments so far!

Ada finished her first year of “School” its really her daycare program but its Pre-k3 so its actually a structured educational classroom with lessons. They finished the year with a show, and it was beyond adorable! She did great singing all her favorite nursery rhymes and we got to meet some of her little friends from school, it was very cute!

We got to meet our new baby Niece, Natalie Isobel, who arrived June 8th! She is the most precious itty bitty and Ada loves her soo much! I got to take some pictures of them in the hospital when Big Sister Savannah met her little baby sister for the first time! 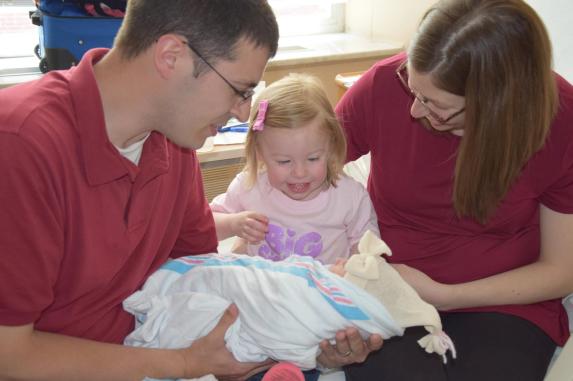 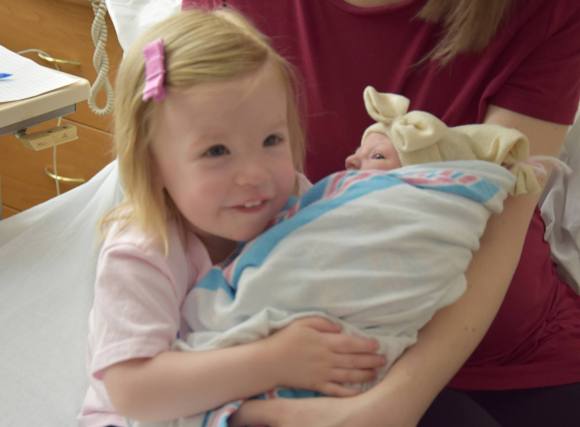 And a couple of Ada being the most Awesome big cousin ever! She’s such a pro holding her little Baby Natalie! 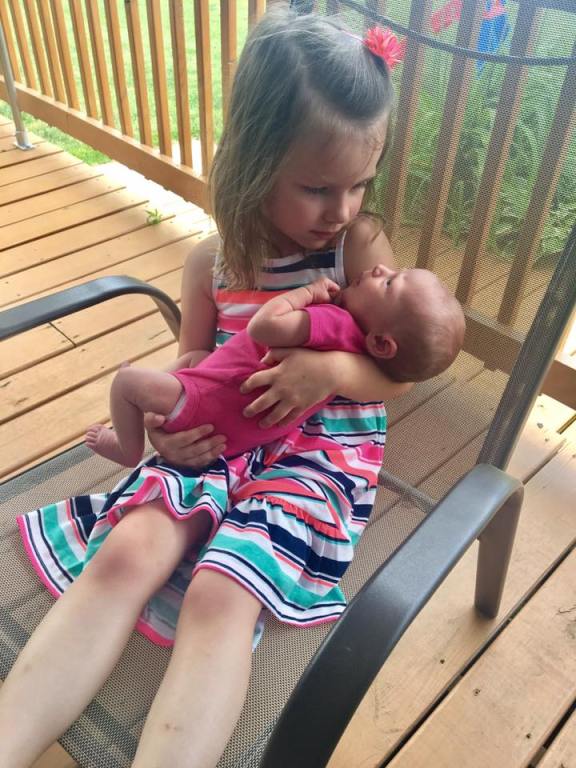 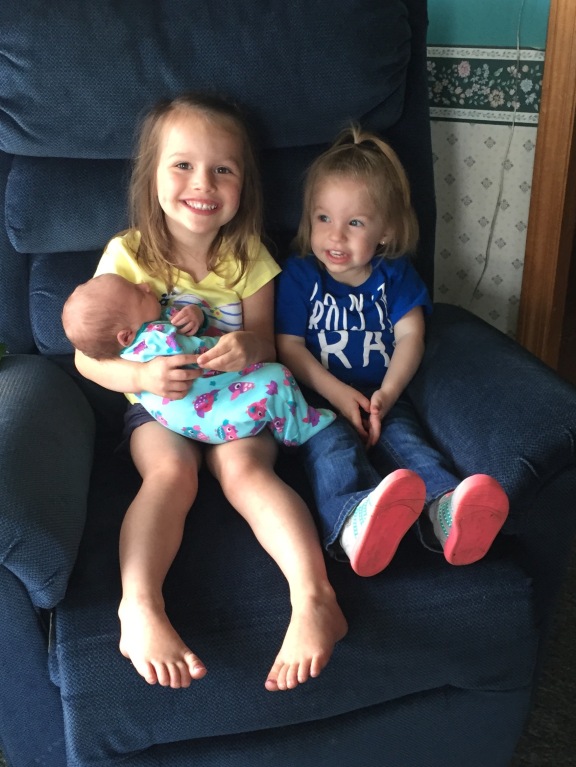 And one of me meeting my third little niece for the very first time! 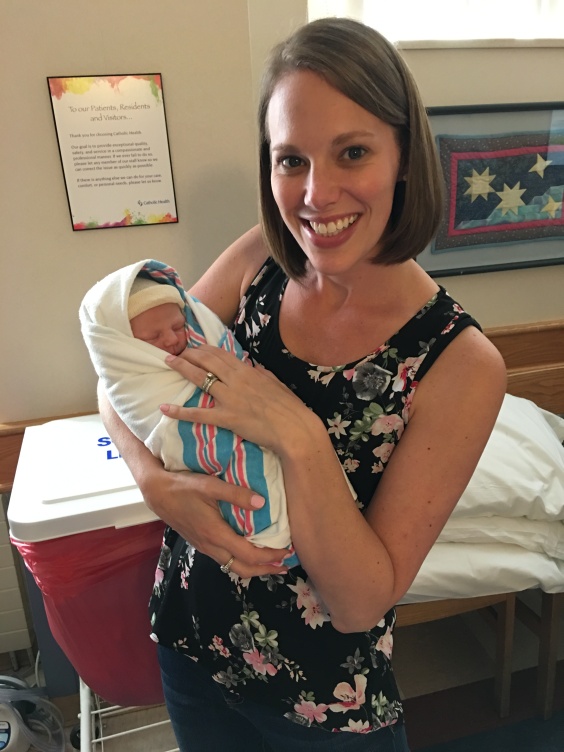 Its been a fun summer and I feel like its flying by, so I made a bucket list for us of things I want to do this summer! So far I think we’ve only done one of them…. Spend the day at Niagara Falls. We went to visit my old office crew and say hello to everyone, followed by an afternoon in the park. I thought it wouldn’t be too crowded on a Wednesday afternoon but I was wrong, all we got to do was the Cave of the Winds, which Ada LOVED! 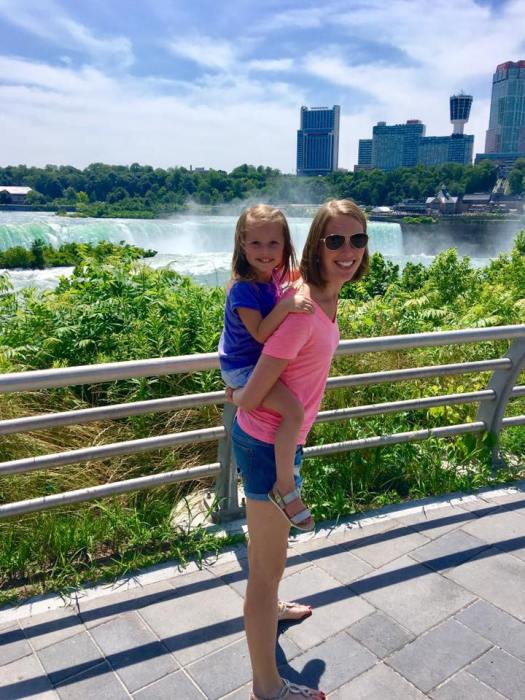 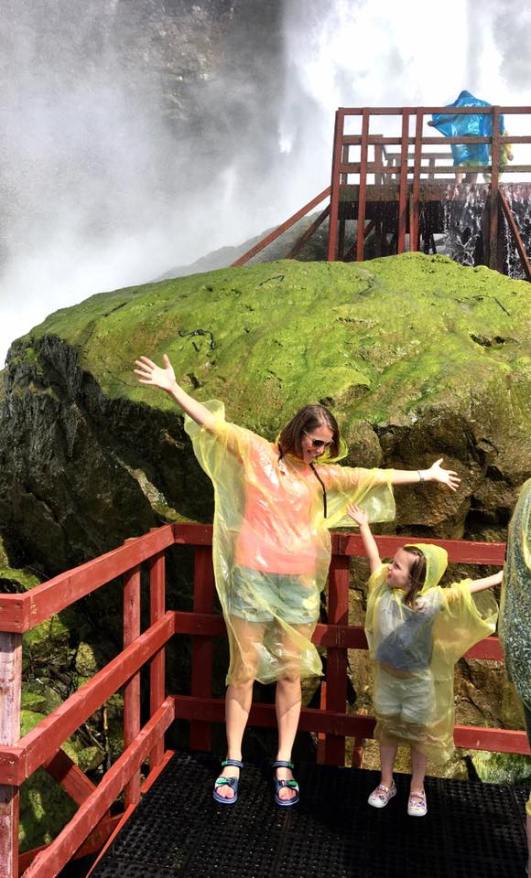 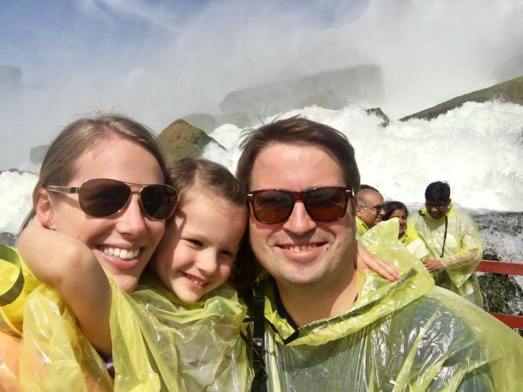 So far its been a great summer, but here is what else is on our bucket list…. Let’s see how much of it we can fit in!

We’ve also been spending a lot of time with our friends, just hanging out on our back deck, (we won’t have it much longer) we’ve been playing in the sprinklers, having campout fires (as Ada calls them), movie nights and family time!

More summer posts to come! We had a super fun fourth of July weekend and hopefully we’ll be able to cross some more stuff off our summer bucket list! How has your summer been so far?

Ada’s birthday was on a Tuesday this year and I couldn’t take the day off work, she was at my parents on her actual birthday. They ordered pizza for lunch and I came over to join them for my lunch hour. My sister and Savannah also came, so we had a little party! It was also the first time Ada got to meet her new cousin Savannah and hold her! 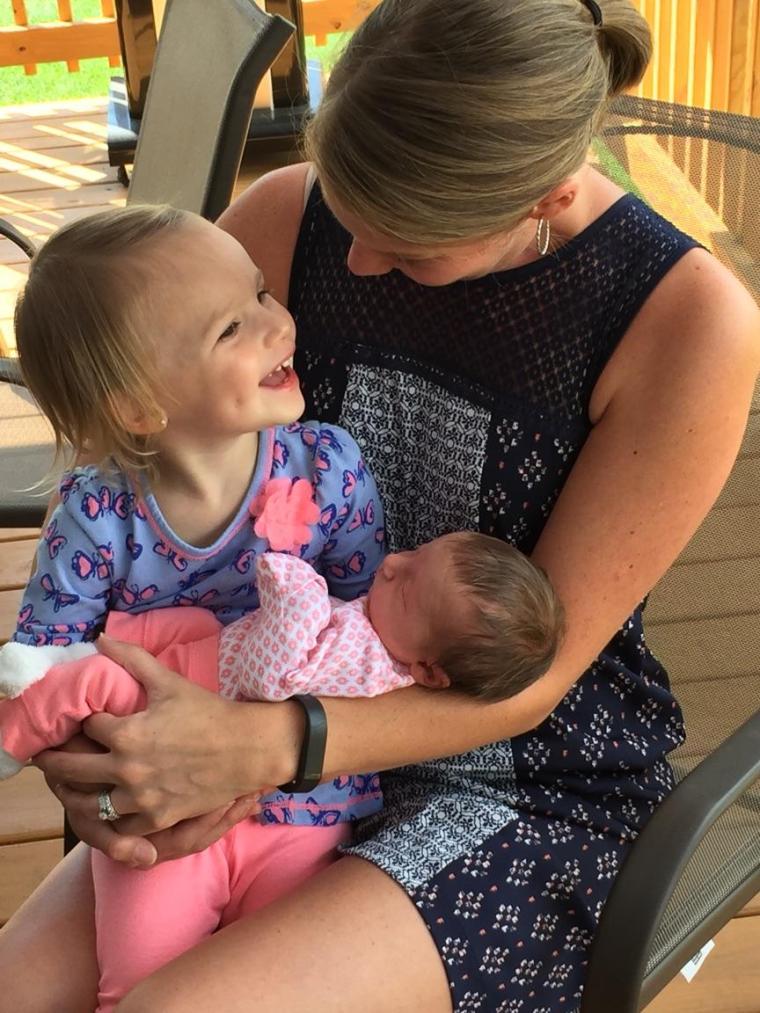 The weekend following her birthday we took her to the Strong National Museum of Play in Rochester. (link) It was so much fun! Its about an hour drive from us, so we got a hotel room for the night, took her out to dinner and went swimming in the pool.

The museum was amazing, we could have done two full days there and still not seen it all. She loved the Wegmans grocery store, where she could push the cart around, shop for groceries and then cash out at the registers.  The Sesame Street set was great, she recognized all her favorite characters of course!

After the museum we all needed a quick nap at the hotel and then  we took her out to dinner. We couldn’t find anything super child friendly that appealed to Dan and I, (we hate chain restaurants) so we risked it and took her out for sushi! She did great! She loved the edamame, I tried shelling it for her, but she found it more fun to try and eat the bean out of the pod, so that kept her busy, she also loved playing with the chopsticks, but who doesn’t??

The following morning we checked out, took her to breakfast and drove home before the Bills game started! We had a great weekend celebrating my two year old and hope to make this a fun tradition! 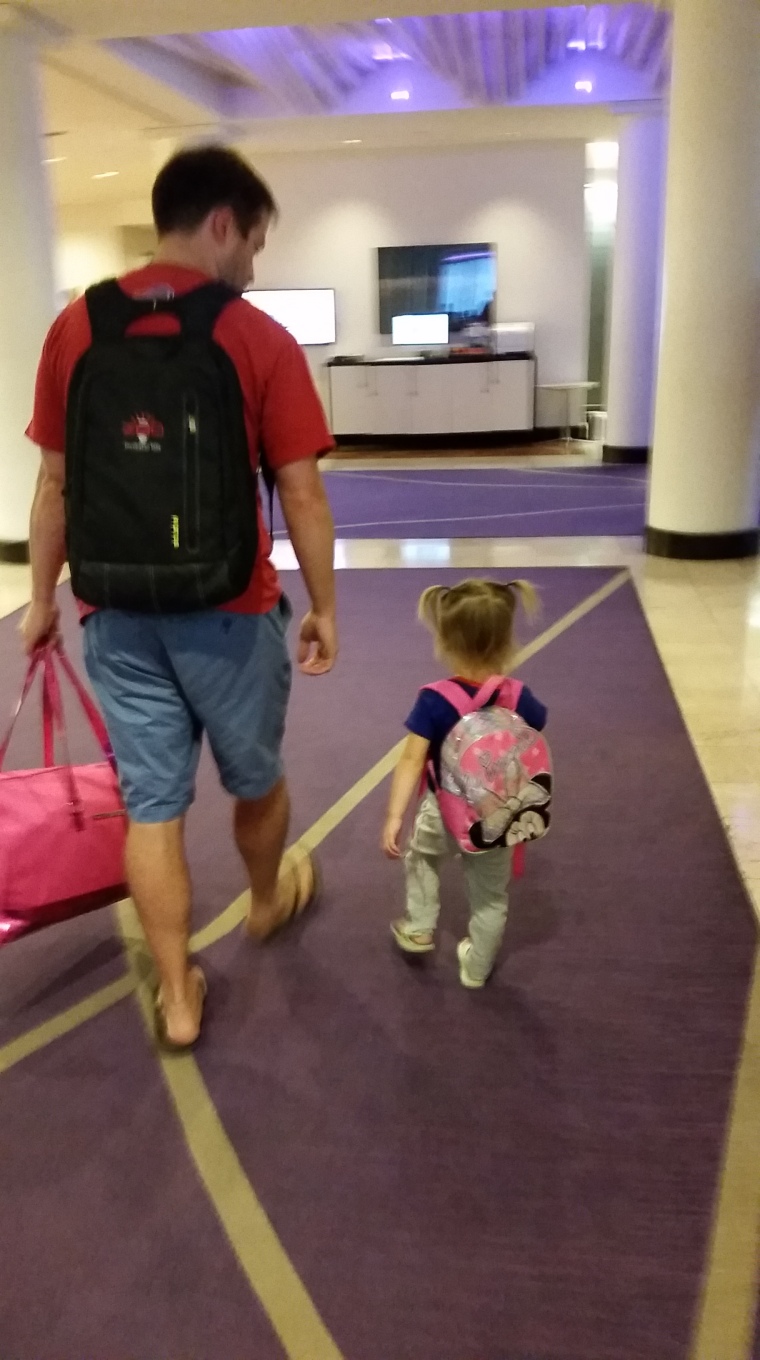 We have really been enjoying our summer lately. This is my favorite time of year leading right up to 4th of July! There is just so much going on and so much outside fun and sun time! This past week we’ve been taking full advantage of all the fun activities going on. There was a food truck rodeo happening last Thursday and everyone from my office decided to meet out and bring our families.

Last night we went downtown where the Buffalo Philharmonic Orchestra was playing in the park, It was packed with people, food trucks, ice cream and more! 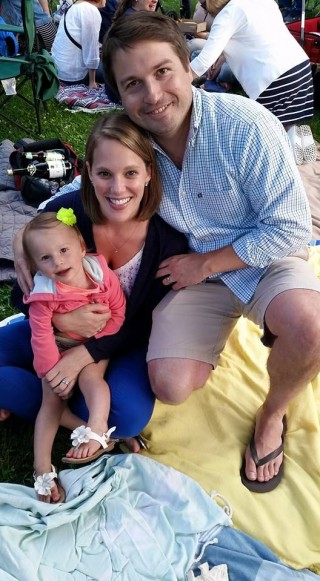 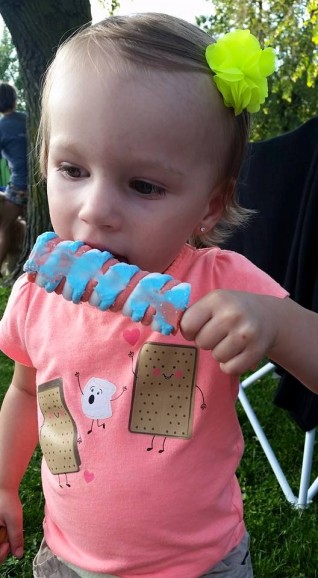 We spent most of the weekend just eating popsicles and playing with the hose in the back yard! We also brought out the kiddie pool and sat poolside for awhile. Just a super fun summer livin’ kinda weekend. I wish everyday could be like this! 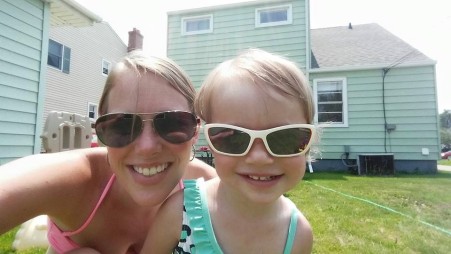